The 20th National Education Council ended. 4 new proposal drafts and advisory decisions consisting of 128 articles were taken up at specialized commissions and were voted on by the general assembly.
﻿ 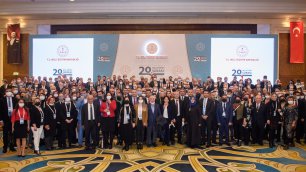 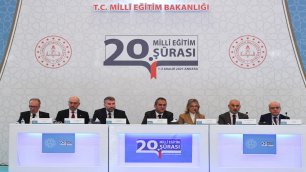 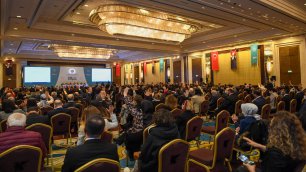 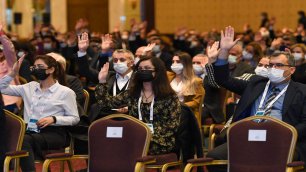 The 20th National Education Council which was convened after a 7 year long break in order to take advisory decisions has completed its activities.
4 new proposal drafts and advisory decisions consisting of 128 articles were discussed at the specialized commissions and were voted in the general assembly during the National Education Council chaired by Minister of National Education Mahmut Özer.
A total of 128 articles were recorded as advisory decisions at the Council.
"I consider this decision as a promise to keep. I will closely follow up the practice concerning each article. I will share the information concerning the rate of activating these articles every three months," said Minister Özer.
17 of these 124 articles were accepted by a majority vote and the rest were accepted unanimously.
These articles will be used for drawing the new roadmap in "equal opportunity in basic education", "professional improvement of teachers" and "reinforcement of teaching profession" under the roof of "equal opportunity in education" title.
"Today, is December 3 and we will share the improvements made in line with the advisory decisions with all stakeholders on March 3, 2022 as I promised during my keynote speech," said Özer.
"More than 600 council members played active role"
Özer stated the commission sessions made a great contribution to the council and went on to say;
"More than 600 council members played an active role in the largely participating council. We do not have any strict policy about three areas we discussed under the title of equal opportunity in education and we are open to ideas and suggestions. We are proud that the council was very democratic and people from different points of views expressed various views. We have only one national education system and in addition to being the mission of our Ministry, increasing the quality of our education system is the responsibility of everyone. Actually education is a matter of mutual understanding and we can discuss different views and suggestions. Bringing different stakeholders of education regardless of their differing views under the same roof shows the future of democracy in our country is promising."
Minister Özer expressed his wish that these decisions will contribute to the future of the country and its people and will carry the education system to a higher level.
"We will achieve progress in defining the new roadmap with the support of decisions taken during the council"
"From now on, the Ministry of National Education is stronger than ever. It is because we had the opportunity to review our policies by considering the views of all stakeholders of education such as all nongovernmental organizations, labor unions, higher education institutions, students and parents. I am glad that we organized this council and finalized it with productive decisions," stated Minister Özer.
Reminding that President Recep Tayyip Erdoğan announced that the Teachers' Profession Law draft will be discussed and passed in the Parliament within a short period of time, Minister Özer noted that the new law will bring solution to problems which were present for many years and it will allow stakeholders of education to write history together with the Ministry.
"Even though there is a tendency to create a negative atmosphere about education in Turkey by focusing on problems, I believe that we have recently actually got the chance to achieve an important transformation in education and we kept pace with globalization. We have rapidly witnessed some changes. I disagree with the conception that despite physical investments, quality was neglected. Recent investments in education are focused on quality," said Özer.
4 new proposal drafts were voted
In addition to 124 article advisory decisions, 4 new proposal drafts were submitted to the General Assembly for voting.
Within this framework, proposals such as, "religious, moral values and values education should be included to the curriculum of preschool education programs by considering the development level of children" and "addition rights and bonuses must be provided to teachers working in disadvantaged regions in terms of socio-economic level" were accepted unanimously.
General Assembly approves the proposal of a high school student
Meanwhile, Aselsan Vocational and Technical Anatolia High School 9th grade İsmet Çağrı took the floor in order to express his suggestion.
He proposed tax reduction for students during their technological device purchases like computers and tablets and his suggestion was unanimously approved.
Özer's suggestion concerning the fight against drug addiction was accepted unanimously in the General Assembly.
When asked about his position concerning advisory decisions of the council, Özer said the following: "As the Minister of National Education, I cannot discuss if every suggestion was right or wrong. As known, decisions of the council are advisory decisions. There is no obligation to implement these decisions. In this light, the Ministry will review all decisions and draw a roadmap within the framework of equal opportunity in education. In other words, this council does not mean that the Ministry will reject or accept every advisory decision."

250 LIBRARIES FOUNDED IN 81 CITIES THROUGH RECYCLING

The goal of establishing 250 libraries in 81 cities through recycling within January with the purpose of encouraging recycling culture was [...]

Being one of the most important socio-economic development models of our country, vocational education continues to progress especially [...]

SANCAR: AZİZ SANCAR EDUCATION CAMPUS IS A GREAT HONOR FOR ME

Nobel Prize winning scientist Prof. Dr. Aziz Sancar will visit Ankara in February to participate in the opening ceremony of the education [...]

Minister of National Education Mahmut Özer participated in the ceremony held at the Kavaklı Primary School on the occasion of the [...]