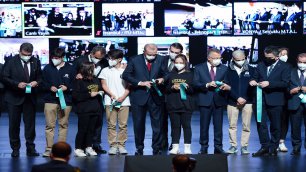 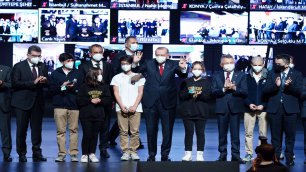 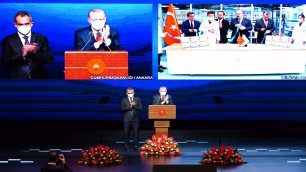 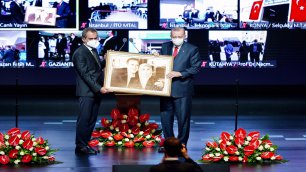 President Recep Tayyip Erdoğan extended his deep sorrow and condolences for the students and their families who lost their lives during a traffic accident in Afyonkarahisar during his speech at the ceremony to mark the end of the1000 Schools in Vocational Education Project and the inauguration of the 50 R&D Centers organized at the Beştepe Nation Congress and Culture Center.

"Thanks to Allah, education activities successfully continue without any problems in the fifth week of face-to-face education. Ministries of National Education and Health take all necessary measures in order to prevent any problems. We see that parents and parent-teacher associations are showing a sincere effort for the continuation of face-to-face education. We are extremely happy about this consensus and cooperation among stakeholders of education. It is our duty as a human being and a Muslim to make use of science and medical devices against the pandemic."

"The sooner we quickly achieved to pass the vaccination threshold and maintain social immunity; we will spend a healthier winter. Otherwise, we might not be able to prevent an increase in problems that may occur due to cold weather," President Erdoğan stated.

Erdoğan stated that the government is working in an effort to keep schools open as well as making new investments to boost the education infrastructure.

"We have allocated 1 billion liras to selected schools as a part of the 1000 Schools in Vocational Education Project, last year. Within the scope of the project, we have established 1000 libraries in 1000 schools and installed 10 thousand smart boards and 1000 labs. Moreover, we have reinforced the infrastructure of existing labs and workshops. And today, we are inaugurating 50 R&D centers in vocational and technical schools in 24 cities. We believe that R&D centers are very important for encouraging teachers and students to design new products and apply for the registration of intellectual property rights of their products. Students will have the opportunity to turn their ideas into designs and make contribution to the economy. These centers will increase professional skills of students and allow them to follow new technologies. Vocational schools will become the new centers of attraction with their reinforced infrastructure, improved opportunities, modern R&D centers and experts teachers," said President Erdoğan.

President Erdoğan stressed that support policies implemented in the vocational and technical education recently yielded positive results in many fields.

"With the elimination of the coefficient system which was one of the worst implementations of the February 28 process in the Turkish education and economic system, prejudice against these schools have ended to a great extent," said Erdoğan, "Both students and parents started to attach more importance to vocational education in their career plans. Similarly, producers and industrialists understood the value of vocational education.  Education- production- employment cycle is reinforced as a result of collaboration with the private sector."

President Erdoğan stressed that the largest portion of assignments to positions in state offices are made in education and went on to say: "Since 2002 until today, we have assigned a total of 713 thousand and 625 teachers. We enjoyed the honor of assigning 20 thousand young teachers last month and we also announced that we will assign another 15 thousand teachers in a short period of time. Moreover, we are planning to solve 3600 additional indicators issue until the end of this year. We are not only making promises; we fulfill our promises. What really matters is the welfare, peace and motivation of our teachers who will educate younger generations."

Meanwhile, Minister of National Education Minister Mahmut Özer expressed his gratitude to President Erdoğan for his participation in the ceremony. Stressing that vocational and technical education schools are important for decrease in young unemployment rates and for the development of Turkey, Özer said that vocational education went through a paradigm shift under the leadership of President Erdoğan.

Cooperation with strong actors of the sector

Stressing that development and growth of vocational education means increase in production and employment and provide safe future for the youth, Minister Özer went on to say:

"Within this context, our priority is to maintain stronger ties between the private sector and vocational education and reinforce collaboration. Currently, we have established cooperation agreements with strong actors of all sectors. As a part of these agreements, vocational school graduates have priority in employment."

Özer explained that the new paradigm includes including sector representatives to the update of education programs, on the job training and internship processes.

"These systematic steps encouraged students to prefer vocational education. We have seen that students show great interest to vocational schools and successful students preferred to enroll in vocational and technical schools."

Stressing that another important development in this field was achieved in intellectual property rights, Minister Özer noted that the Ministry has established a total of 50 R&D centers in vocational and technical schools.

Özer pointed out that "1000 Schools in Vocational Education" Project played an important role decreasing success discrepancies among schools and went on to say:

"The project aimed at reinforcing the infrastructure of selected schools and decreasing success differences among schools. It also aimed as disseminating the recently improvement achieved in the vocational education to other schools. Our government allocated 1 million liras to this project within a year."

Notes from the ceremony

Following one minute silence and recital of national anthem, participants of the ceremony watched the promotion video of "1000 Schools Project and R&D Centers."

750 DISABLED TEACHERS APPOINTED ON THE INTERNATIONAL DAY OF DISABLED PERSONS

"Appointment of Disabled Teachers and Barrier Free Vision 2030 Introduction Meeting" was held on the December 3, the International Day of [...]

The 20th National Education Council ended. 4 new proposal drafts and advisory decisions consisting of 128 articles were taken up at [...]

EFFICIENCY OF THE INSPECTION SYSTEM INCREASED

With an amendment in the Presidential Decree, a more effective guidance and inspection mechanism based on personal and corporate [...]

Member of a specialized commission at the 20th National Education Council, Prof. Dr. İlber Ortaylı said, "We believe that this council is [...]

President Recep Tayyip Erdoğan announced at the opening ceremony of the 20th Education Council held in Beştepe Nation Congress and [...]