Minister of National Education Mahmut Özer had a meeting with World Bank Vice President for Europe and Central Asia Anna Bjerde and an accompanying delegation.
﻿ 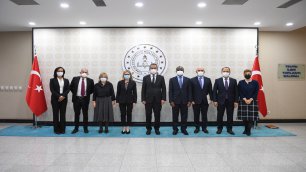 Minister of National Education Mahmut Özer had a meeting with World Bank Vice President for Europe and Central Asia Anna Bjerde and an accompanying delegation to discuss "Reinforcement of Education Infrastructure", "Disaster Risk Management At Schools" and "Safe Schooling and Distance Education" projects as well as measures required to be taken for keeping schools open and reinforcement of access to education.
Minister Özer said during the meeting held in the MEB Tevfik İleri Conference Hall that his Ministry carried out important projects with the World Bank and his priority is equal opportunity in education.
Noting that Turkey has made important investments for increasing accession to education and increasing schooling rate in the last 20 years, Minister Özer said, "Outcome of these investments can be seen in the schooling rate in all levels of education. Schooling rate in primary education was already high but the schooling rate which was 44 percent in secondary education reached 88 percent. Meanwhile, the schooling rate among female students showed a great increase. Especially after 2014, the female schooling rate exceeded male schooling rate in both secondary education and higher education."
Özer stated that the number of teachers increased in parallel to increasing schooling rate in the last 20 years adding that the number of teachers which was 500 thousand in the 2000s currently reached 1.2 million.
Reminding that increase in the quality of education can be seen in the international student success surveys, Özer noted that Turkey achieved higher scores in especially PISA and TIMSS surveys when compared to previous years.
Özer stressed that Turkey defined four basic priorities in education which are increasing accession to preschool education, decreasing opportunity differences among schools, professional improvement of teachers and reinforcement of vocational education.
Noting that academic success depends on various different reasons and socioeconomic level of family has dominant impact in early education levels, Özer explained the goals of the Ministry in preschool education as follows: "Our goal is to increase schooling rate of 3 year old students from 14 percent to 50 percent, 4 year old students from 35 percent to 70 percent and 5 year old students from 75 percent to 100 percent. Within this context, we will build 3 thousand new kindergartens in the country."
Concerning the transformation in vocational education, Minister Özer said: "Currently, we are establishing cooperation with sector representatives in all fields. We have witnessed that academically successful students started to prefer vocational education. This allowed them to learn while earning money."
Özer stated that vocational high schools contributed to overcoming the shock of the Covid-19 pandemic by producing many products varying from masks to disinfectants.
Reminding that the Ministry has established 50 R&D centers in order to increase education and production quality of vocational high schools, Özer stressed that they have shaped projects carried out in cooperation with the World Bank within the context of these four priorities.
"We have agreed in principle that we would shape projects within this framework. Investments aiming at providing equal opportunity in education in our education system including approximately 20 million students will be an important example for different countries of the World," said Özer.
"I applaud your success"
Meanwhile, World Bank Vice President for Europe and Central Asia Anna Bjerde said, "First of all, it was very important to hear from you about your priorities. I would like to thank you for sharing the progress you achieved in the schooling rate. Information concerning female schooling rate in higher education is higher than male students is new for us. I applaud your success. Projects concerning distance education and digitalization is the one that made us very happy. Right now, we have three ongoing projects with the Ministry of National Education. We are happy to work with you in the field of education."
Anna Bjerde stated that priorities of the Ministry are among the priorities of the World Bank too and Turkey's achievements in education can be shown as an example for other countries.
Noting that existing projects will be updated within this framework, Anna Bjerde said that they will support Turkey's new projects.
Deputy Ministers Sadri Şensoy and Petek Aşkar and Deputy Director General for EU and Foreign Affairs Cemal Yıldız were also present at the meeting.

The Ministry of National Education continues to establish libraries built from recycled materials as a part of recycling and zero-waste [...]

"Vocational High School Students Meet Families" project which was initiated in 2017 and continued in 2022 with revisions help vocational [...]

Directorate General for Dormitories and Scholarship Programs affiliated to the Ministry of National Education has prepared Dormitory [...]

Minister of National Education Mahmut Özer announced that his Ministry will introduce a new concept under the name of "village public [...]

Upon the decision taken during the 6th Meeting of Education Ministers of the Organization of Turkic States,  the 1st Teacher Exchange [...]