President Recep Tayyip Erdoğan and the Minister of National Education Mahmut Özer attended the Transforming Education Summit that took place in New York during the 77th session of the UN General Assembly.
﻿ 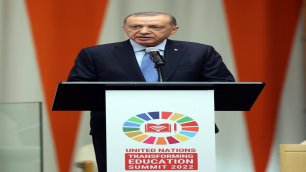 President Recep Tayyip Erdoğan greeted the participants during his speech at the Transforming Education Summit in the United Nation Trusteeship Counicl in New York and thanked UN General Secretary Antonio Guterres for the summit.
Stressing that the main element that keeps nations strong, pioneers change and adds value to the world is education, Erdoğan said that the path to "strong society, strong country" ideal can be reached by making the correct assessment of human resources and maintaining a quality education process.
Erdoğan stated that Türkiye is a country that offers free education in all levels of education from kindergarten to university adding that, "We are taking historical steps in order to disseminate education, increase the quality of education and maintain equal opportunities in education in the last 20 years."
Noting that his country has been working in an effort to reinforce the education infrastructure in every field varying from increasing the number of classrooms to teacher appointments and from distribution of free textbooks to all students to aids to families with limited economic conditions, President Erdoğan said that they have equipped education institutions with sports centers, digital libraries, labs and smart boards.
President Erdoğan went on to say that they have adopted "4+4+4 education reform" and increased the compulsory education to 12 years.
"We have increased the schooling rates in the entire country with this increase. We have initiated a special project in order to encourage families to enroll their female children in education institutions and increased the schooling rate more than 90 percent. After the beginning of our preschool campaign, the schooling rate of 5 year old children increased from 78 percent to 93 percent. Our goal is to increase this figure 100 percent," said Erdoğan.
Reminding that Türkiye activated digital platforms which offered many electronic contents, distributed free learning materials and organized summer schools during the pandemic which affected the entire world, Erdoğan stated that his country carried out projects in order to improve literacy and arithmetic skills and recover skill losses.
"We promote environmental awareness"
Erdoğan stressed that his country focuses on vocational education adding that, "We establish close cooperation with vocational education institutions and industrial zones based on a learn by producing approach. We established international vocational and technical Anatolia high schools in an effort to share our experience in vocational and technical education with other countries."
Erdoğan noted that Türkiye Maarif Foundation is filling an important gap with its education institutions established in 49 countries mainly in Africa, Asia and Balkans.
"Meanwhile, the Turkish Cooperation and Coordination Agency (TİKA) has been providing education and technical training support to especially underdeveloped and developing countries. We have been offering free education opportunities to thousands of foreign students in our education institutions every year by giving scholarships. We do not make distinctions between our students and the children of more than 4 million migrants in our country and show all required effort for their education. In addition to our international efforts, we also update our education program and curriculum according to the requirements of our era. We included environmental education and climate change courses into our K12 program in order to promote environmental awareness to our children. We continue to do what needs to be done in order to raise individuals who are beneficial to the society, our country and all humanity," stated Erdoğan.
Erdoğan wished that the Transforming Education Summit would be an opportunity to lay the foundation of a brighter and more livable and fair world and thanked all participants of the summit.
Erdoğan walked to the summit hall
President Recep Tayyip Erdoğan walked to the UN Trusteeship Council from Turkish Home in order to attend the Transforming Education Summit.
Director of Communications Fahrettin Altun and Presidential Spokesman İbrahim Kalın accompanied President Erdoğan and Minister Özer.

Minister of National Education Mahmut Özer stated that the vocational and technical high schools increased their income as a part of [...]

Minister of National Education Mahmut Özer announced that 98,64 percent of 614 thousand and 390 teachers who attended expert and head [...]

Minister of National Education Mahmut Özer made a speech at the High Level Ministerial Meeting organized as a part of the Transforming [...]