President Recep Tayyip Erdoğan and Minister of National Education Mahmut Özer attended the ceremony organized on the occasion of the end of 2021-2022 school year.
﻿ 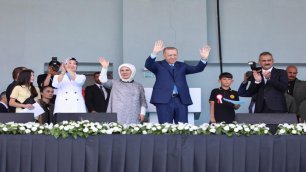 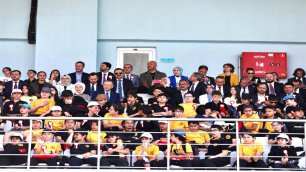 President Recep Tayyip Erdoğan and Minister of National Education Mahmut Özer attended the ceremony organized at the Üsküdar Burhan Felek Stadium on the occasion of the end of the 2021-2022 school year.
President Erdoğan's spouse Emine Erdoğan, Minister Özer's spouse Nebahat Özer, İstanbul Governor Ali Yerlikaya; Deputy Ministers Petek Aşkar, Nazif Yılmaz and Sadri Şensoy were also present at the ceremony.
Following the recital of the national anthem and a moment of silence, the largest children's choir of the world consisting of 3,150 children gave a mini concert.
President Recep Tayyip Erdoğan said that he recalled his youth during his speech and said that he used to play soccer when he was young at a stadium near the ceremony ground.
He thanked teachers who worked with sacrifice despite the challenging conditions and congratulated parents who trusted in the national education during the pandemic and sent their children to school.
"Education comes first for the last 20 years"
"Like we did at the end of every school year, we are happy to raise open-minded, intellectual students with high moral values. Our faith in our bright future grows stronger because we know that future scientists, doctors, teachers and engineers of our country are among these students. These children will build today's Türkiye. Due to this reason, education comes first for the last 20 years," said Erdoğan.
President Erdoğan said that every penny spent on education is an investment to the future of the country adding that, "Türkiye has always allocated the lion's share to education in all budgets prepared by Justice and Development (AK) Party governments. We are in a multifaceted struggle to raise the quality of education, make education more widespread and achieve equality of opportunity in education."
"We are aiming at distributing 100 million supplementary sources to students"
Noting that Türkiye had the opportunity to see the outcome of investments made to education during the pandemic, President Erdoğan went on to say that, "We can clearly see that if we failed to increase the budget allocated to the education, we would face many complications during the face-to-face education."
Erdoğan stated that despite having the largest increasing number of students, Türkiye is among the countries that achieve the highest increase in the international quality indicators. The Ministry of National Education is distributing free textbooks and supplementary sources to students.
President Erdoğan noted that the Ministry distributed more than 36 million free supplementary sources to students and they aim at increasing the number of these free sources to 100 million until the end of this year.
"Do not waste your time in front of the computers and tablets"
Reminding that students will have a long holiday this summer, President Erdoğan said, "Holiday means games, vacation and quality of time with friends. But, please do not forget that it is also an opportunity to learn. Do not stop reading and doing research. Do not waste your time in front of the computers and tablets. This may cause addiction."
Erdoğan noted that the Ministry of National Education has initiated a new project about summer schools adding that the Ministry of Youth and Sports, Presidency Religious Affairs and other state offices organized summer courses and training schools for students.
Meanwhile, Minister of National Education Mahmut Özer expressed his happiness to complete face-to-face education with success during the school despite Covid-19 pandemic.
He noted that his Ministry aims at raising academically students and teaching them the values and culture of this country. He also congratulated teachers for their contribution.
Özer added that the Ministry of the National Education has organized science, arts, mathematics and English summer schools in the entire country for the first time in its history.
School libraries will remain open throughout the summer.

Second report concerning education policies implemented in line with the advisory decisions taken during the National Education Council is [...]

The Ministry of National Education, Ministry of Family and Social Services and Ministry of Interior Affairs signed a Cooperation Protocol [...]

603,864 APPLICATIONS HAVE BEEN MADE TO THE TEACHING CAREER STEPS TRAINING PROGRAMS

Minister of National Education Mahmut Özer announced that 603,864 applications have been made to the Teaching Career Steps Training [...]

Minister of National Education Mahmut Özer attended the ceremony held on the occasion of sending the first export truck as a part of the [...]

President Recep Tayyip Erdoğan and Minister of National Education Mahmut Özer attended the ceremony organized on the occasion of the end [...]