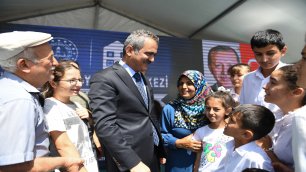 Heart of the villages
The project aims at using village schools as kindergartens when they cannot be used as primary schools, converting them to public education centers when they are used as kindergartens and it is an important move it will start the development campaign from villages.
Village public center project is not only limited to kindergarten, primary school and public education center. The Ministry will also organize training programs for village people according to their tendencies and needs of the village. At the same time, these centers will serve as women's cooperatives in villages and integrate these cooperatives with the village public centers in order to blend the training programs with the labor market.
Both parents and children will get education under the same roof
In line with special needs of villages, the village public centers will serve as kindergarten, primary school, training center, library and maths, science and design workshop. They can also be used as youth camps. The Ministry will organize educational and social activities and both parents and children will get education under the same roof. Village public centers which became a place where children meet with experienced people and provided them the opportunity to transfer their culture to younger generations will also be used as lifelong learning education centers.

Minister of National Education Mahmut Özer stated that the vocational and technical high schools increased their income as a part of [...]

Minister of National Education Mahmut Özer announced that 98,64 percent of 614 thousand and 390 teachers who attended expert and head [...]

Minister of National Education Mahmut Özer made a speech at the High Level Ministerial Meeting organized as a part of the Transforming [...]