﻿ ﻿ MINISTER ÖZER GOT MEETS HIS COUNTERPART FROM TRNC ﻿ ﻿

MINISTER ÖZER GOT MEETS HIS COUNTERPART FROM TRNC 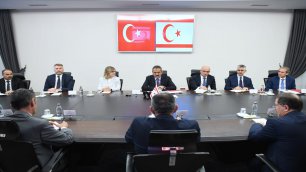 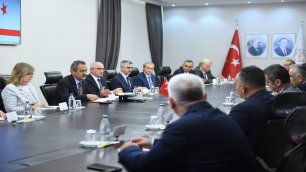 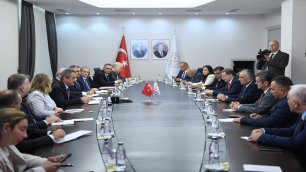 Minister Özer said "Welcome to the motherland" to Çavuşoğlu who was appointed as the Minister of the National Education of TRNC in the new government during the meeting organized at the MEB Tevfik İleri Meeting Hall.
Özer commemorated those who were martyred in the Cyprus Peace Operation and mentioned important cooperation projects between two countries.
"I have full confidence that the cooperation and coordination between our ministries will increase in this new term. The Turkish Republic of Northern Cyprus and its people have a special place in our hearts. We are ready to support policies that will maintain stability and welfare in the TRNC. The level they achieved despite restrictions in the international platform is admirable," said Özer.
Özer noted that his Ministry has defined three prior topics in recent years in order to carry the education system to a higher level. Noting that the education system in Türkiye increased its performance in the last 20 years and they achieved a paradigm change in the vocational education after making cooperation with the labor market, Özer stated that he will be happy to share experience and cooperate with TRNC in education.
Noting that they have adopted a new approach in training programs for teachers, Özer said that approximately all of 1,2 million teachers attended training programs in 2022. We have passed the Teaching Profession Law which defined teaching as a career. We have organized training programs for expert and head teaching positions. We have founded Teacher Information Network in order to give professional and personal training programs for teachers. We have seen that professional training hours per student figures increased rapidly. In 2020, this figure was 44 hours, in 2021 it increased to 94 hours and our goal for 2022 is to exceed 100 - 120 hours."
Özer stressed that equal opportunity in education is another priority of his Ministry adding that, "Our major priority in the last 20 years is the massification of education. Our goal was to increase schooling rates in all levels of education to 90 percent. Thanks to Allah, Türkiye achieved these goals under the leadership of our President Recep Tayyip Erdoğan in the last 20 years. We also lifted all antidemocratic practices in the education system such as headscarf ban and coefficient practice in the last 20 years. Now, we focus on reinforcing equal opportunity in education. Our system turned into a system that responds to social demands."
"We increased the schooling rate of 5 year old age group from 78 percent to 93 percent in the last 10 months"
Özer said that there are a total of 2,872 kindergartens affiliated to the Ministry of National Education and their goal for 2022 is to increase the number of these schools to 3,000 until the end of 2022.
"Our goal is to increase the schooling rate of the 5 year age group to 100 percent, to 70 percent in the 4 year old age group and to 50 percent in the 3 year old age group. Our goal will provide us the opportunity to reach the OECD average. This is crucial for equal opportunity in education. We also opened village school preschool classrooms. We increased the schooling rate of the 5 year old age group from 78 percent to 93 percent in the last 10 months as a result of these efforts," said Özer.
Özer stated that Türkiye will be happy to share its knowledge and experience in education with the TRNC.
Özer went on to say that, "We have opened the EBA platform to the use of students in TRNC during distance education. Last year, we included tablet distribution to our existing smart board and education technology support to TRNC."
Özer added that as the motherland, they will continue to take steps in order to reinforce the education infrastructure in TRNC and boost cooperation between two countries.
Meanwhile, Minister of National Education of TRNC Nazım Çavuşoğlu thanked Minister Özer thanked him for his support and stated that the Republic of Türkiye is allocating its means to support TRNC.
Following the speeches of Ministers, delegations continued negotiations.

Minister of National Education Mahmut Özer got together with provincial directors of education of all 81 cities of the country and [...]

10,000 SCHOOLS IN BASIC EDUCATION PROJECT WILL BE COMPLETED BY THE END OF AUGUST

10,000 Schools in Basic Education project is about to be finalized. Physical environments of disadvantaged primary and secondary schools [...]

"Vocational and Technical Education Cooperation Protocol" was signed between the Ministry of National Education and İstanbul Teknopark [...]