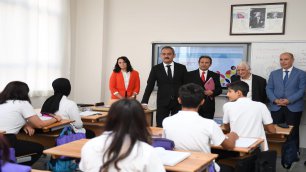 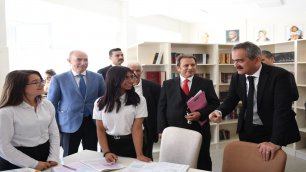 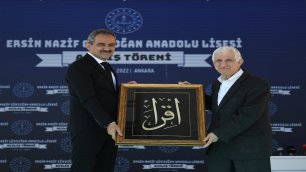 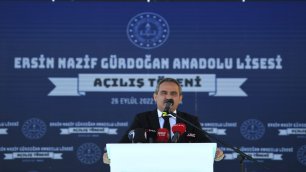 Itri Fine Arts High School students and teachers gave a recital before the inauguration ceremony.
Minister of National Education Mahmut Özer thanked for the recital during his speech at the ceremony and noted that the Ministry aims at raising students who adopted the culture and arts of the country in addition to academic success.
Neşet Ertaş Village Public Center will be inaugurated in October
Minister Özer commemorated Neşet Ertaş on the 10th anniversary of his demise adding that a village public center named after Ertaş will be opened in October in the home village of the late artist.
Özer noted that the newly opened school is named after Ersin Nazif Gürdoğan who is not only an engineer and an academician but also a person who played a pioneer role in peaceful and humane growth.
Reminding that the last twenty years of Türkiye marks a crucial period in the development of human resources of the country, Özer stated that antidemocratic practices such as headscarf ban and coefficient practice were lifted during this period.
He said that important investments were made in order to increase schooling rates in the last twenty years adding that:
"We see that there is a significant increase in the schooling rates when we compare the 2000s with 2022. Schooling rate of five year old children increased from 11 percent to 93 percent. Schooling rate in high school education reached from 44 percent to 90 percent. There were 300 thousand classrooms in the education system and now we are talking about 857 thousand 900 hundred classrooms. Our large education system has 19 million students and 1.2 million teachers."
Özer thanked President Recep Tayyip Erdoğan for allocating the largest share of the budget to education.
"We are making an important investment in preschool education this year. We are enjoying the excitement of taking final steps in order to reach our goal to increase the schooling rate of five year old children to 100 percent. We have increased the schooling rate of five year old children from 78 percent to 93 percent within nine months," said Özer.
20 million new supplementary sources in addition to distributed 136 million supplementary study books and question banks
Minister Özer mentioned developments in vocational education and reminded that the number of apprentices and foremen increased from 159 thousand to 780 thousand.
He noted that the Ministry has been carrying out important projects and activities about many important issues varying from Teachers' Profession Law to support programs for professional development of teachers, from decreasing success differences between schools to reinforcing equal opportunity in education.
"Within this framework, we distributed free textbooks and supplementary sources to students at the beginning of the 2022-2023 school year in order to maintain equal opportunities in education. In addition to 153 million free textbooks, we have distributed 136 million free supplementary sources as announced by President Erdoğan to students for the first time in the history of our Ministry. We will distribute additional 20 million supplementary sources for free," stated Özer.
Minister Özer said that in addition to scholarships, the Ministry provides free lunch to 1.5 million students.
This year, the Ministry allocated 3 billion and 750 million lira budget directly to schools for stationary, cleaning, minor repairs and lab products. Schools spent 2 billion and 150 million liras for the new school year preparations and they still have 1 billion and 500 million liras in their accounts.
"It is not all, we continue to make investments"
Özer noted that vacant village schools are reopened as primary school, kindergarten and village public and education centers adding that 1,692 village public centers and 1,710 kindergartens were inaugurated in this manner at the beginning of the new school year.
He said that the Ministry was opening approximately 50, 70 or 80 kindergartens every year but they opened 1,710 kindergartens only within this year. The Ministry aims at opening 3 thousand new kindergartens by the end of this year.
"We are planning to open a sports high school in Sincan. As a part of our vision to use the public sources in the most productive way possible, we will use the existing sports complex constructed by the Ministry of Sports and Youth as the building of the new school," he added.

Minister of National Education Mahmut Özer said that 23 thousand interactive boards will be installed at schools and a total of 545 [...]

Minister of National Education Mahmut Özer announced that the Ministry has prepared an action plan that stipulates a detailed road map in [...]

Minister of National Education Mahmut Özer got together with kindergarten administrators from 81 cities as a part of the History, Culture [...]